Like so many of our franchisees, this lifelong athlete was already familiar with i9 Sports before he bought a franchise. In fact, he was one of our program directors.

Before Izzy Rahim became an i9 Sports franchise owner in 2018, he was already very familiar with the brand. “I was actually a Program Director for an i9 Sports owner,” Izzy says. “I was also a teacher. It was definitely something I got to learn about for a couple of years before deciding, ‘Oh, I’m going to buy a franchise’ when it became available. I was part of the i9 Sports family for two years before buying my franchise. That made it a lot easier on me, I would say.” In this i9 Sports Franchise Review, he talks about his experience as a new owner in the North Shore area of Chicago.

What made you think you might want to own one of these yourself?
I’ve always been involved in athletics. I played competitively through college, and I’ve always known I wanted to one day open up some kind of sporting business, where I could work with kids and create my own leagues and all that. When I started working for i9 Sports, I would say it was the first opening day that I did that really made me say, “Wow. This is something I want to own one day.” Seeing all the kids, seeing all the teams and just seeing everything that you built live in action, it was right then and there that I knew, “Oh, I definitely want to own one of these one day.”

That’s a pretty significant impact, especially for your first opening day. How different is i9 Sports from your typical youth leagues?
It’s a completely different ball game. From the way you communicate with all the parents and the way you organize everything to the values that you try to instill in all the parents and the players. Even from the coaches’ standpoint, it’s completely different. The coaches work with you. They’re not just your regular, “Hey. You want to volunteer? Okay. No problem.” There’s a whole vetting process that goes into recruiting these coaches. They don’t just let anyone come in. They want to make sure that the right person is going to be out there with these kids, because the main difference I saw was that i9 Sports actually cares about these kids having a great time. They’re not just there to take money from parents that register their kids to play.

You mentioned you played competitively in college. What sport or sports did you play?
I played soccer through college. Through high school I played baseball, soccer and hockey.

How many sports are you offering with your i9 Sports franchise now?
Right now, I offer three sports. I offer flag football, basketball and soccer. I’m going to start offering T-ball in the fall, so it’ll be four in the fall.

Do you have a goal or a timeline set up to get up to six sports?
Right now, I’m taking it step by step. If I’m going to add T-ball in the fall, I would say it’ll be about another two years before I’m offering six sports there. It’s really dependent on the demand and how these programs are building up. I don’t want to have six programs be half-built. I’d rather have four strong programs and then have that energy and that demand to build up the other two.

I know you’re in the North Shore area of Chicago. Was that an area that was not being served by i9 Sports previously?
North Shore was actually the area I was working for before. I was able to get a nice feel of the territory. I actually grew up in the territory, so it was a little bit of an advantage, I would say, in terms of knowing the competitors and all that.

Did you buy from the previous owner?
I purchased it from the previous owner. That made it easier because I had already developed a routine for how to do opening days, how to market and all that, but there were definitely a bunch of new hurdles when it came to owning the business. There was a whole other side that I wasn’t previously exposed to. It’s a different mindset when you’re an owner and you’re still learning in your first year.

How have the people at headquarters been able to support you with that new side of the business? What have they done that’s been valuable for you?
Well, my business coach, Nick, he’s the best. He’s always having calls with me, he’s always checking in on me to see if I need anything. He’s always offering insights. They have business coaches for each franchise owner to support them, to look out for them, to pay attention to what’s going on. If your numbers are a little lower, they’ll reach out to you and they’ll say, “Hey, what can we do to get these back up? Here are my suggestions. Let’s try to work together and get them back up.”

It’s a real nice atmosphere; they’re not pushing you or anything like that. They want you to know that this is your business and that they are there as a support system. They will do anything they can to help you succeed, because they want every i9 Sports franchise to succeed. They don’t just say, “Hey, here’s the keys to the kingdom, go do whatever you want.” They’re there every step of the way and as you start to grow, they give you more flexibility.

How do you feel about the direction of the brand?
I think that they just continue to trend up. They’re always coming out with new things. They’re always updating the franchise manager to try to make it easier for an owner to operate their business. I feel like they’re always taking steps to try and become an even stronger national brand and I think it’s only a matter of time before everyone in the country knows, i9 Sports, that’s the place to go.

What are your personal goals for growing your business?
One of the things I want to do is open up a second territory in the next five, six years. I want to maximize this territory for the next five years and make sure every part of the territory is crossed out. One of my main goals is to have a stranglehold on the territory in terms of, anywhere you go throughout the North Shore territory, the first thing that parents think about for youth athletics is i9 Sports. I want to be the top one out of all the park districts, all the other sports franchises that are out here and just be the king of this territory. I think having two territories in 10 years would be amazing, and it would be a real sign of success to be able to maximize your territory and then go and get to do that all over again.

That was kind of the glaring difference for me, when I was looking at these, talking to my other friends. Looking at other franchises, there was no family feel, there was no touch with it. It was all kind of, “If you fail, well, you’re on your own.” It wasn’t more like, “Hey. Let’s work together. Let’s build it up. We want to be there for you.”

I know you’ve only been in it eight months at this point, but are you able to meet your business goals or are you on your way to meeting your goals with this franchise?
Yes. I feel like the first year of owning any kind of small business is the toughest, because you’re learning a bunch of different things that you may not have known in the past. I didn’t know the business aspect of it. You’re putting everything you make right back into different marketing ideas, into the business and ways to improve. That first year, you’re trying to really build up that clientele and make things the best they can be.

But all in all, I feel like I’m well on my way to meeting my goals. You get what you put into it. I’ve definitely hit some new highs in the last eight months. It definitely makes you feel like you’re on the way to where you want to be.

What characteristics do you think someone needs to be a success in this business?
You need to have a passion for youth sports and kids. Being enthusiastic, confident, outgoing — I think those are huge, because when you’re trying to build relationships with schools or businesses, you need to have personality. When you’re going up and talking to them, you can’t be passive, you can’t be quiet.

You need to be able to accept the word “no”. That’s one thing that I’m still learning to do, but it’s key. One “no” doesn’t mean you’re going to fail as a franchise, because all it takes is one “yes” to hit it big. You may get a “no” at this school, but then you may get a “yes” from a school that has three times the amount of kids. That gives you the confidence to go back to that school that said “no” later on and say, “Hey, what can we do to work with you?”

Finally, that passion needs to be there. If you’re not passionate about kids or youth sports, you’re not going to make it.

What else should a prospective buyer know?
You need to go in there knowing that it’s not just going to come to you easily, that you need to put in the work and you need to be able to go through the ups and downs, especially as a new owner. The home office gives you everything you need to succeed, and they’re with you the entire way.

If you’d like to learn more about investing in one of the best youth sports franchise opportunities around, fill out the form on this page to download our free franchise report. You can continue exploring the i9 Sports offering on our research pages. 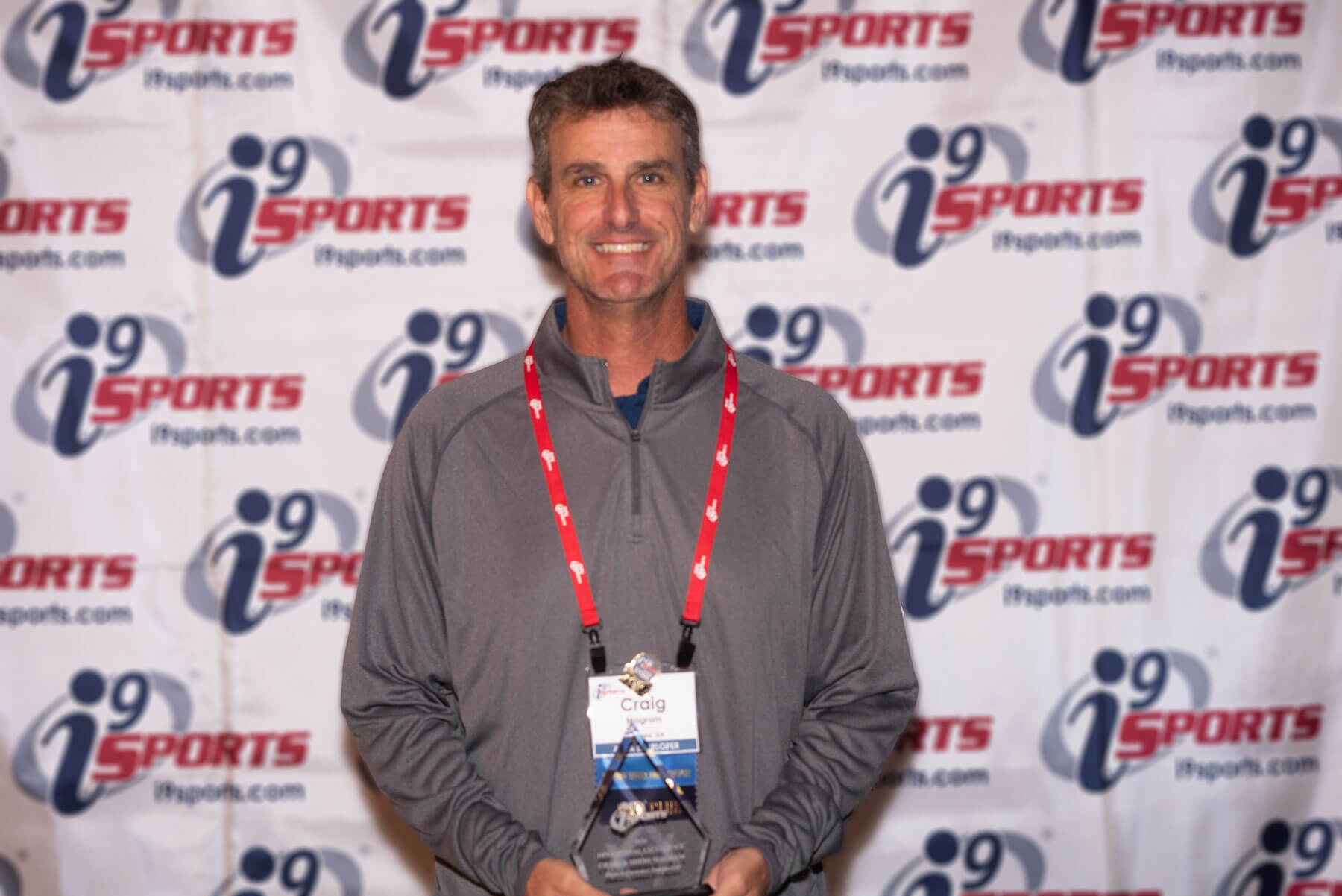