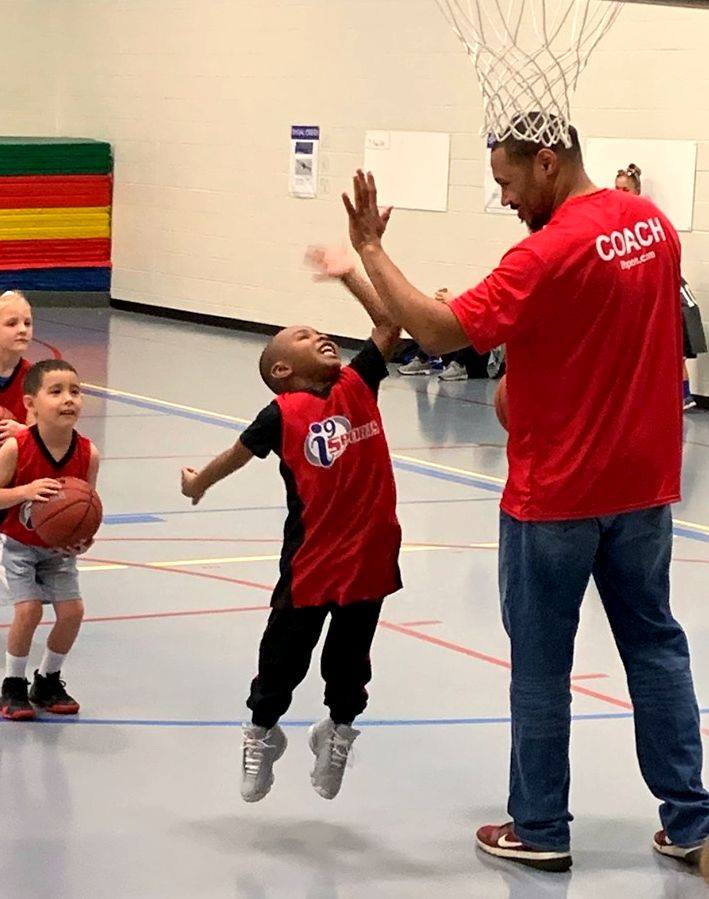 When she saw how successful her sister was as an i9 Sports franchisee, Tiffany DeSautell was inspired to follow in her footsteps

Tiffany DeSautell and Erikka Ault grew up together from the time they were toddlers, at least on alternate weekends, when DeSautell’s mom married Ault’s dad. They’ve always been a tight-knit family that loved sports, with both women playing sports as children. Ault was the first to become an i9 Sports franchisee, and when DeSautell saw how well she was doing, she decided to give it a go. Today, DeSautell runs two venues in Tulsa, OK, where they offer flag football, soccer, T-ball and basketball. This fall, she and her husband, Kyle, who still works full-time outside the business, plan to add ZIP Lacrosse™. She tells their story in this i9 Sports franchise review.

When did you become an i9 Sports franchisee?
We signed on about a year ago but we haven’t made it through all four seasons yet. After summer, we’ll have hit all four seasons.

What were you doing before you became an i9 Sports franchisee?
I was a fitness coordinator at a retirement community.

Had you ever been involved in sports before?
Yes, I played college basketball at Oral Roberts University here in Tulsa. Point guard.

How did you first learn about i9 Sports?
We learned about it through my sister and my brother-in-law. They purchased theirs a while ago, and we just got to talking to them one weekend and my brother-in-law was explaining everything to me. I thought, that’s right up my alley — just being a sports enthusiast, loving all sports. We would go down and watch them run it and see everything laid out in the fields. That’s what got us. We thought, well, we can do this. That’s what started it, seeing them run it and be successful at it.

What role does your husband play in the business, if any?
Well, we both own it. He will do more of the field stuff — mowing the fields, measuring and marking the fields. And he helps me market, so he’ll go and pass out fliers, he helps put out road signs. I do a lot of the behind-the-scenes stuff as far as emailing, scheduling, doing all the roster stuff. I also market; I set up events. I communicate more with the parents.

He is there at game day two times a month, because he works on the weekends the other two weekends. He helps me with set-up, and he walks around and talks with the parents and makes sure everybody has what they need.

This is already a family affair for you because your sister is in the business. What is your goal for your husband’s involvement in the business? What is your long-term goal?
Our goal is to grow it as big as we can grow it, and then, ideally, it would be nice if both of us could run it full-time, and then eventually in the future let our kids run it if they chose to. We could give them an opportunity to buy it from us, so it’s an investment in that way. They can start working at it at a young age, and know the ins and outs at a young age, and eventually it can be theirs and they could do it full-time.

What is it about i9 Sports that makes you feel it will last long enough for your family to someday make that decision?
One thing that drew us to it was that we only play on Saturdays, so that makes it super-convenient for parents that have multiple kids or parents who are just busy. Their kids can play one day a week instead of two or three days a week, so it’s convenient for the parents. We thought it would be a great league to invest in, because parents look for that convenience.

Another thing is, I grew up as a coach’s daughter. Because my dad was my high school coach, people always thought that I only played because I was a coach’s daughter, and so I really had to prove myself. My husband had almost the opposite situation — his dad traveled a lot so he couldn’t go to all the games. If your dad wasn’t friends with the coaches then you weren’t going to play, no matter how good you were.

So, i9 Sports really creates an opportunity and an avenue for every kid to play. Whether they’re a beginner or advanced, they’re going to get equal playing time and they’re going to be able to play every position.

What do you find to be the most rewarding thing about being an i9 Sports franchise owner?
I just enjoy the challenge of it. When you play sports, that’s one thing, but when you’re actually running a business, you have to be business-minded, too. I’ve always known how it was to be out on the field or out on the court playing and being the athlete, but knowing the behind-the-scenes stuff is what really got me interested in i9 Sports and wanting to do this. I have played in many leagues before, so the business side of it is very intriguing to me.

How often do you talk to other franchisees, and what kind of support do you get from them?
I really use my sister and my brother-in-law as the resource, so I talk to them quite a lot. But recently, now that I’ve been in the position for almost a year and gone through almost four seasons, I’ve had franchisees reach out to me two or three times. One franchisee is actually coming this summer to watch our opening day.

What are some of the things that your sister and brother-in-law have helped you out with?
Well, in stressful situations, they lower my anxiety, telling me that it might be typical in this season to have lower numbers. If I have to reschedule because of all the rain we’ve had, they’ve helped me do that, showing me how to do the scheduling. I’ve gone down there a couple of times and she’s helped me build the rosters, show me how to separate the teams based on the different numbers that we got for the age groups. Just helping me with scheduling a lot, letting us see their fields to see how it’s set up. Dealing with different questions that parents might have — I might ask them how they might handle it, and they’ll help me with that.

When you were growing up, did you and your sister ever talk about being in a sports-related career when you were grown?
I think we both knew that we would both be in some type of sports setting, because we both played sports all growing up. And then I originally thought I would be a teacher, too, because our dad was a teacher and a coach.

As you look back on your first year in business and think about what you did and didn’t know, what advice would you give a prospective buyer?
I would say don’t go into it thinking that it’s going to be super-easy, because it’s going to take all of your weekends, it is going to take hard work, it’s going to take dedication. Going into it you could be just sports-minded and think, “Oh, I can handle this because I’ve been around sports all my life,” but there is a business side to it. I would just tell somebody to go into it knowing that one day you can have people running it, but for the first few years you’re going to be working extremely hard. There’s a lot of work to it, but that first opening day is super-rewarding.